Proto Man, also spelt Protoman and known as Blues in Japan and some localisations, is a major supporting character in the Classic era, introduced in Mega Man 3. He is Mega Man's "brother" and original prototype, created by Dr. Light but abandoned before Mega Man was made.

Proto Man is depicted as looking similar to Mega Man, but wearing red and grey armour, dark shades and a yellow scarf, and often carrying a shield in addition to his buster, the Proto Shield. Though he travels by himself, he often shows up in times of need to assist Mega Man or oppose a villain, typically introduced by his whistled theme melody. He has however fought Mega Man on various occasions, and is cast as an outright villain in the 1994 animated series. 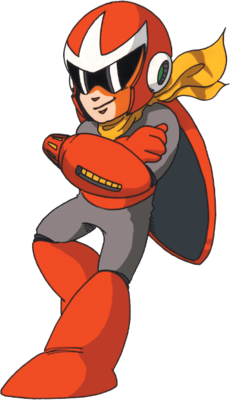 In Mega Man 3, Proto Man appears as a mysterious individual who confronts Mega Man in several of the Robot Master stages. He appears in Hard Man's stage, Shadow Man's stage and Magnet Man's stage, as a miniboss, but shows up in Gemini Man's stage to help Mega Man by destroying a metal structure that is blocking the way, creating ambiguity about his goals that is never fully explained. After defeating the Robot Masters and the eight Doc Robots, he is refought in his own small stage under the name Break Man, wearing a different kind of helmet that covers his face.

As a miniboss, Proto Man walks left and right between the walls of the room and regularly jumps, firing several shots while in the air, but never shooting on the ground, enabling Mega Man to slide under him. He is weak to the Hard Knuckle (and, to a lesser degree, Shadow Blade and Magnet Missile) and has 28 health points, while he deal 4 damage to Mega Man on contact and 2 damage with his shots. As Break Man, he behaves identically to his miniboss form, but can no longer be damaged by anything other than the Mega Buster.

In the ending, after Mega Man and Dr. Wily are both buried under rubble from Wily's collapsing fortress, Proto Man shows up to save Mega Man, and intends to save Wily as well, but declares that it is "too late" (likely assuming Wily to be dead) and leaves without him. When Dr. Light later questions who rescued Mega Man, Proto Man can be heard whistling. His identity as Mega Man's brother is finally revealed in an info card shown at the end of the credits, and his image also seemingly appears in the sky, though it is not made clear whether Mega Man ever learns of his identity.

In the 1994 animated series, Proto Man is stolen and reprogrammed by Dr. Wily at the beginning of the show, appearing in every episode as one of Wily's robots. Though he is still considered Mega Man's brother, with both characters being aware of their relation, he is usually cast as a pure villain, serving as Dr. Wily's second-in-command and aspiring to destroy Mega Man by his own hands. To this goal, he sometimes disobeys Wily and pursues his own plans instead.

In Mega Man 3, all humanoid robots known to have been created by Dr. Light at the time are shown on info cards in the game's ending. As the serial numbers count down, Proto Man's is the last to be shown, revealing his identity for the first time.

Proto Man's CD in Mega Man & Bass is found in Magic Man's stage, possibly referencing his mysterious nature. It is buried at the bottom of the Sisi Roll miniboss room and can only be unearthed with Rush Search.

This article is a stub. You can help Mega Man Wiki by expanding it.