Big Eye,[1] also spelt Bigeye,[2] is an enemy first appearing in the original Mega Man. It is a large, cycloptic robot with a single plunger-like foot that it uses to bounce on. It is the first of various similar giant enemies appearing throughout the Classic era, often utilised as pseudo-minibosses.

Big Eye first appears in the original Mega Man, where it is found in most Robot Master stages, usually guarding the boss door at the end of the stage. It has two forms of movement, between which it switches at random: it will either make a small hop towards Mega Man, or a tall leap, enabling him to run under it.

Big Eyes are notable for having more health than any other non-boss enemy in the game - 20 shots from the Mega Buster are required to take them down. Coupled with their massive collision damage and unpredictable jumps, this can turn Big Eyes into very dangerous enemies if they can't be destroyed quickly or from a safe spot.

The biggest conglomeration of Big Eye enemies in the game is in Dr. Wily stage 1, where three of them are found in the fields outside, guarding the entrance to the fortress.

In Mega Man: Dr. Wily's Revenge, Big Eyes return, appearing in all of the game's stages except Fire Man's. Here, they deal less damage through collisions and their health has been reduced from 20 to 8. However, they can no longer be harmed by Mega Man's attacks or even frozen with the Ice Slasher unless they are jumping or preparing to jump, making them tricky to destroy.

There is usually only one Big Eye in a stage, with the exception of Dr. Wily stage 2, which contains three in a row, similarly to the first Wily stage from the original game. 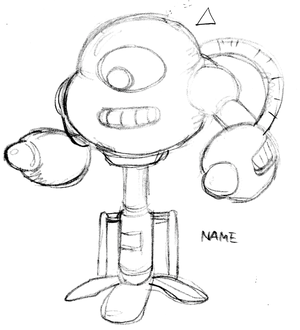