Eddie, also spelt Eddy[1] and originally known in English as Flip-Top,[2] is a supporting character in many Classic era games, debuting in Mega Man 4. He is a small robot built by Dr. Light to be his "cybernetic suitcace",[2] able to contain and transport items in his hollow top.

Eddie has a simple design that does not change much throughout the games, essentially being a robot head on legs, not unlike the appearance of a Metall. His top half resembles a red, metallic container with a lid that can flip open to release his cargo, hence his original "Flip-Top" name in localisations. 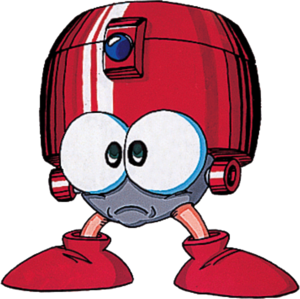 Eddie makes his first appearance in Mega Man 4, where he shows up in certain stages to give Mega Man a random item. He always has an entire room - sometimes hidden - dedicated to his appearance, where he teleports in, walks forward, spits out the item from his top, then teleports out again. Unlike the Surprise Boxes in the previous game, he never awards "small" items, and will either drop a large Energy, large Weapon Energy, 1 UP, or Energy Tank.

If Mega Man collects this item (which does not disappear by itself) and leaves the screen, Eddie will be gone for the rest of the stage. However, if he skips over the item, leaves and returns, Eddie will reappear and potentially award a different item, making it possible for the player to "choose" which item they want by repeatedly resetting Eddie until he drops it.

In Mega Man IV, Eddie is one of the icons on the game's password screen, alongside Rush and Beat, representing the letter E. He can also be seen in the game and will give Mega Man an item as usual, though he only appears in Crystal Man's stage. 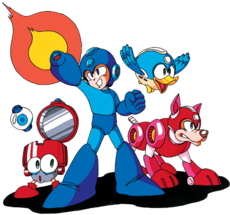 Group art from Mega Man 6. Eddie is on the left.

Mega Man 6 sees another return of Eddie, again acting no different than before. He is found in the Restricted Area (Tomahawk Man), Capital of Science (Knight Man) and Ancient City (Centaur Man) stages, and also appears in Dr. Wily stage 4, right before the final boss battle with Dr. Wily.

In Mega Man V, Eddie appears in his usual role, as well as showing up on the password screen, just like in Mega Man IV. He can be found in Venus's stage, Saturn's stage, and Uranus's stage.

In Mega Man 7, rather than appearing in the stages, Eddie helps Auto run the item shop inside Big Eddie, itself a giant, hollow version of Eddie that can be entered through the bottom. It is unknown exactly what function Eddie serves in the shop, as all actions, from accepting Mega Man's Bolts to turning them into items, are performed by Auto, though he may simply act as a storage unit. 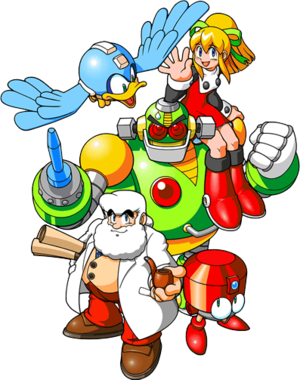 Group art from Mega Man 8. Eddie can be seen in the bottom-right.

Mega Man 8 marks Eddie's first appearance in which he is not involved in supplying Mega Man with items, instead appearing as one of the possible power-ups in the auto scrolling Rush Jet sections in Tengu Man's stage and Dr. Wily stage 2. While active, Eddie uses a jetpack to hover near Mega Man, periodically opening his top to lob bombs in an arc. This lets him excel primarily at hitting enemies below Mega Man, though his forward range is limited.

Eddie is back in his item-supplying role in Mega Man & Bass, where Mega Man (but not Bass) can purchase him as a permanent "weapon" power from the Shop, referred to as Eddie's "delivery service" by Auto. When the Eddie weapon is selected, Mega Man can press a button to summon him, causing him to fly in with his jetpack from the previous game and drop up to 3 random items, using up weapon energy with each item he drops. Unlike in his original appearances, these items can be small, and may even be Bolts rather than refills, making the power somewhat of a gamble to use.

If there is not enough weapon power for Eddie to drop all three items, he will drop as many as he can, even if it would bring the weapon energy to less than 0, then leave.

In the mobile crossover game Mega Man X DiVE, Eddie does not appear as a character, but is often used as the icon for progression rewards, which can be clicked to "open" Eddie when the requirements have been reached and receive the items. Different colours of Eddies appear for different progression steps, in the order grey -> blue -> red for the Story and Co-op modes, green -> blue -> yellow -> red on Challenge mode, and grey -> green -> blue -> yellow -> red for Daily Missions.

Additionally, a periodic Store event called Request from Eddie allows the player to trade in Armor Parts for various item supply boxes, including three kinds of "Zenny Buckets" that are shaped like Eddie and coloured blue, purple and gold, respectively.

In the 1994 animated series, Eddie appears as an occasional supporting character, though he is green here instead of red as in the games. His purpose his similar to his in-game counterpart, supporting Mega Man with useful items like Energy Tanks sent to him by Dr. Light, and he is also able to talk.

Eddie's CD in Mega Man & Bass is found in Tengu Man's stage, possibly due to his appearance in the Mega Man 8 version of said stage. It is buried in the ground under a Joe Classic, right in front of the boss door, and can only be unearthed by Mega Man with Rush Search.