Rush Coil is a Rush transformation weapon debuting as one of his original forms in Mega Man 3 and appearing as a basic tool in many later games. It allows Rush to extend a springboard from his back that can send Mega Man upwards, serving a similar purpose to the Item-1 and Item-3 weapons in Mega Man 2 by granting Mega Man additional upwards mobility. 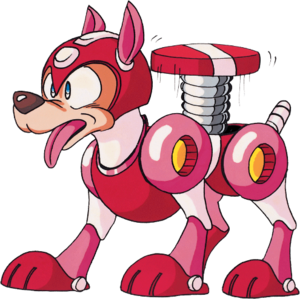 In Mega Man 3, as well as later games in which it appears, Rush Coil is part of Mega Man's starting arsenal rather than being acquired from a boss or stage. When equipping the weapon, Mega Man turns red and white and is able to summon Rush by pressing the firing button, who teleports down directly in front of him and attempts to materialise on the ground (if there is no place for Rush to stand, he will instead fall through the bottom of the screen and nothing will happen).

If Mega Man falls onto the summoned Rush, a springboard will pop out of his back and launch Mega Man upwards, enabling him to reach high places. Every bounce costs 3 weapon energy, however, and Rush will teleport out and need to be resummoned afterwards. He will also start flashing and leave if left idle for a while, and likewise disappears if Mega Man scrolls him off the screen or switches to a different weapon.

Similar to other Rush transformations, if Mega Man presses the firing button while Rush is already there, he will fire standard Mega Buster shots instead, enabling him to still shoot at enemies while bouncing on Rush.

Rush Coil returns in Mega Man 4, once again part of Mega Man's starting repertoire and acting similar, with a slightly different shade of red. Its cost has been lowered to 2 weapon energy per bounce, however, and while Rush will still teleport out if left idle, he will stay around longer and no longer flash before leaving. Additionally, the bounce will be triggered if Mega Man touches Rush from any side, rather than having to fall onto him from above, a change that is unique to this game.

Although Mega Man is still able to fire standard buster shots while Rush is out, he is not able to use the New Mega Buster's charge functionality while the weapon is equipped, and will lose any charge on switching to Rush Coil.

Rush Coil makes its Game Boy debut in Mega Man II, back to the way it acted in Mega Man 3 and costing 3 weapon energy, though with a slightly different sprite. Oddly, Rush waits around for the full length of his idle timer even after being used in this game, though he still can only be used once per summon.

While the classic Rush Coil does not appear in Mega Man 5, Mega Man begins the game with a modified version known as New Rush Coil, which flips the springboard from the top to bottom and allows Rush himself to bounce up while Mega Man stands on him. This allows for more control in the air, as Mega Man can jump off at any time; however, the concept has not been revisited in later games.

Rush Coil appears In Mega Man III and Mega Man IV, looking and acting the same in both games. It costs 2 weapon energy per bounce as in Mega Man 4, but will flash and can only be triggered from above as in Mega Man 3, essentially combining the two versions.

Rush Coil returns in Mega Man 7, once again part of the starting set of weapons. Although the springboard is now smaller, Mega Man's colour no longer changes, and Rush is summoned in a sitting rather than standing position at first, the tool still functions essentially the same, costing 2 weapon energy like in Mega Man 4. Unlike earlier games, and Rush no longer leaves if left idle, allowing Mega Man more time to plan his jump.

As in Mega Man 4, Mega Man can fire standard shots from his Mega Buster while Rush is present, but cannot charge the buster. As Rush no longer leaves automatically, this ability essentially persists after the initial summon unless Mega Man uses up the bounce, scrolls Rush far enough off the screen, or switches to a different weapon and back.