Bass, known as Forte in Japan, is a major character in the later Classic era, debuting in Mega Man 7. He was created by Dr. Wily as an answer to Mega Man, being inspired by his design and powered by a powerful form of energy, Bassnium, that Wily discovered by accident.

Bass is a humanoid robot similar to Mega Man, but wears a black, yellow, white and grey armour, with blue/purple details and yellow "fins" on his helmet evoking Dr. Wily's hair. He appears throughout the games as both an antagonist and a playable anti-hero, often driven by a desire to prove that he is the world's strongest robot moreso than following Dr. Wily's orders.

He is often acompanied by his pet Treble, a robotic wolf that he can fuse with into super-powered forms, similar to Mega Man and Rush. 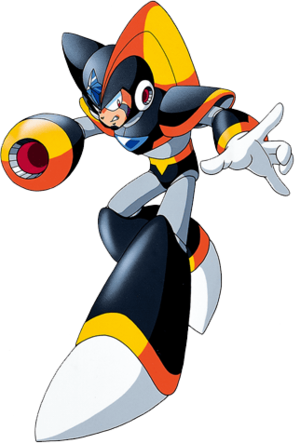 Bass makes his debut in Mega Man 7, first appearing as the boss of the Opening stage, who fights Mega Man by jumping up and down and occasionally shooting a laser straight forward. Mega Man cannot lose this fight, which ends when either robot's health becomes low enough, but the results slightly affect the ensuing dialogue. Bass introduces himself and Treble and claims that they have been trying to stop Wily while Mega Man was gone, musing that he may not need their help (if Mega Man won) or remarking that he is not strong enough to take on Wily himself (if he lost). He and Treble then teleport out, leaving Mega Man to wonder if he can trust them.

After defeating the first four Robot Masters, Mega Man consults Dr. Light about Bass, who does not believe that he is their enemy. Later, when exploring Shade Man's stage, Mega Man finds Bass seemingly damaged in front of the boss door. Bass claims that he was careless to be defeated so easily and intends to leave Wily to Mega Man, but Mega Man insists they are a team and that Bass should see Dr. Light for repairs. Bass and Treble do so, but when Mega Man later returns to the lab after defeating the second set of Robot Masters, Bass has trashed it and stolen the plans for Mega Man and Rush's new enhancements. Dr. Wily then appears on a monitor screen and reveals that Bass and Treble were his creations all along, intended to trick Mega Man into giving them access to the lab.

In Dr. Wily's fortress, Bass is encountered twice, each time in a miniboss fight. In Dr. Wily stage 1, his battle is similar to the one in the Opening stage, though he now has the ability to charge up his shots and will also move around the room more than he previously did. In Dr. Wily stage 2, he and Treble use the stolen enhancement to fuse into Super Bass, Bass's answer to Super Mega Man, who gains the power of flight and throwing rocket fists and is fought in a vertical, low-gravity environment. Both forms are weak to Super Mega Man's charged fist attacks, with regular Bass taking 6 and Super Bass taking 4 damage from each hit. After his second defeat, Bass questions why he cannot defeat Mega Man, and teleports out once more.

After Mega Man defeats Wily, Treble teleports in and saves the doctor before Mega Man can shoot or apprehend him, and Bass himself appears one last time, gloating that Mega Man is too late and promising that they will meet again. 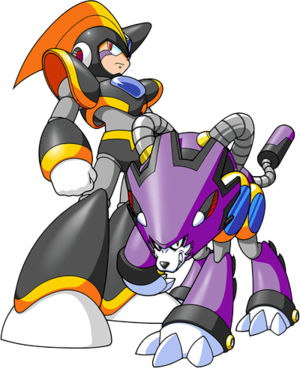 Art with Treble, from Mega Man 8.

In Mega Man 8, Bass is one of the characters showcased in the pre-title opening and also appears in the intro on starting a new game, using Treble in a Rush Jet-like form to fly around the city and confront Mega Man, who is on Rush. Although Mega Man does not wish to fight and tells him that they are "not enemies", Bass fires a shot at him, but is subsequently knocked off Treble and into a building by Mega Man's own buster shot. Mega Man leaves and Bass intends to pursue him, but misses his chance, as his arm is stuck in wiring. Blasting his way out, he promises that they will meet again.

In the game, Bass eventually makes good on this, appearing in Dr. Wily stage 3 as a miniboss. He declares that Mega Man cannot escape this time, gloating that he has acquired new powers. He and Treble then fuse into Super Bass again, enhanced by Evil Energy this time. Winning the fight and attempting to bring Bass to his senses, Mega Man states that Bass cannot beat him with "fake power", but Bass merely retorts that he will never give up as he teleports out.

Bass appears as a racer in Mega Man Battle & Chase and is shown racing against Mega Man in the intro. His car is the Treble Darkstar, with a design based on Treble, and his abilities mirror those of Mega Man in every way, being able to fire small shots from the Bass Buster or a single "Bass Blast", equivalent to a charged shot.

Bass's reason for entering the race is to defeat Mega Man, and his track in the Grand Prix mode is the Base Course. After completing his story, Bass realises that winning against Mega Man in a race is not the same as doing so in an actual battle, and intends to challenge him again. 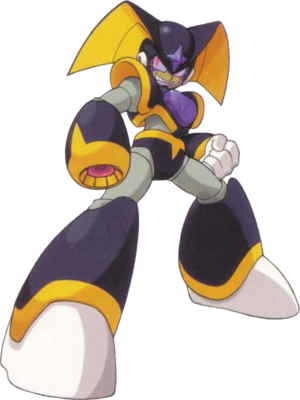 In Mega Man & Bass, Bass appears as one of the two playable characters, selectable when starting a new game. After Dr. Wily's fortress is supposedly attacked by the rogue robot King, he has moved into Dr. Light's lab together with Wily. When King subsequently attacks a Robot Museum to try and steal the robot data to build an army, Bass and Mega Man are sent out to investigate.

Bass's story in the game is largely identical to Mega Man's, with only slight differences in dialogue and a different ending. At the Robot Museum, Bass finds King already there, being confronted by Proto Man. Despite King defeating Proto Man, Bass mocks him, claiming that everyone knows he is the world's strongest robot. King escapes with the data, but leaves a Green Devil behind to deal with Bass.

After defeating the eight Robot Masters, Bass uses their weapons to gain access to King's palace, where he confronts King. King initiates a battle, which at first appears futile due to King's impenetrable tower shield, but Proto Man shows up to settle the score. Despite Bass insisting that he can handle King himself, Proto Man expends all his energy in a powerful "Big Bang Strike" that destroys King's shield, but exhausts Proto Man. Bass complains that Proto Man "stole the spotlight", but the latter reminds him that King is not finished yet.

After King is defeated, he reiterates his beliefs that robots are superior to humans, but Bass reminds him that humans created robots, also questioning who created King. When King reveals his creator to be Dr. Wily, Bass is shocked, but Wily appears on a monitor screen, referring to Bass as an enemy and urging King to finish him. King summons the giant Jet King Robo, but Bass defeats him again. As King's Palace is about to collapse and he urges Bass to escape, Bass worries what King is going to do, but teleports out when King assures him he will be able to evacuate. Bass goes after Wily in his newly built fortress, where he refights the eight Robot Masters and defeats the doctor.

Held at buster-point by Bass, Dr. Wily claims that he built King and had him fight Bass not to deceive him, but rather to test his strength, and recognises that by defeating King, Bass has proven that he is the mightiest robot in the world. Bass does not believe him, but Wily reveals that he has plans for a new model, "King the second", and proposes that this new King and Bass can work together. However, Proto Man enters and destroys the computer with the blueprints, foiling these plans.

Dr. Wily commands Bass to destroy Proto Man, but he hesitates, and Proto Man reminds him that he is strong and able to act on his own rather than having to follow Wily's orders. However, he explains that Bass has not been able to defeat Mega Man because he only fights for himself. After Proto Man has left, Bass denounces his statement, declaring that he will keep fighting solely to destroy Mega Man.

Bass comes with a different set of basic abilities than Mega Man, which greatly change his playstyle. Notably, Bass is able to perform a double jump, which makes it easier for him to pass many of the game's platforming challenges and gives him more vertical and horizontal mobility. He is also able to dash rather than using Mega Man's slide, which does not reduce his height, but gives him momentum that can be combined with his jump or double jump to leap extremely far, bypassing wide pits with ease.

His standard manner of attack is the Bass Buster, which fires shots rapidly while the button is held and can be aimed in 7 directions (excluding straight down), but its shots deal half damage to most enemies unless using an upgrade. The Bass Buster also cannot be charged like the Mega Buster can, its shots do not go through walls by default, and Bass cannot walk while using it, though he can still move forward by jumping.

When visiting the Shop, Bass has access to a different lineup of items. While many of these are also available to Mega Man and are simply recoloured for Bass, others, like the Treble Boost, are exclusive to him. He misses out on Mega Man's exclusive items, however, including Rush Search, which prevents him from digging up certain optional data CDs that are buried in the ground.

Like Mega Man, he is also able to copy the powers of defeated Robot Masters, granting him new weapons that can be selected from the pause screen and use up Weapon Energy. Apart from the Bass Buster and Treble Boost, all of Bass's weapons are identical to Mega Man's, though they look slightly different when used by him.

Bass returns as a playable character in Mega Man 10, originally available as DLC, but part of the base game in later releases. He again possesses his own set of abilities, including a form of Treble Boost available from the start of the game, though he loses the double jump from Mega Man & Bass. His Shop is run by Reggae and includes the Treble Item and Treble Rescue as special items, letting him call Treble to award a pick-up item or to save him from a pit, respectively.

In the crossover mobile game Mega Man X DiVE, Bass appears as an unlockable Hunter Program, and another separate one exists of his Super Bass form.

Bass's equivalent in the Battle Network era is the Net Navi Bass.EXE, who looks similar to his Classic era counterpart, but wears a brown cloak. He has no Operator and appears frequently as a hidden boss, beginning with the original Mega Man Battle Network.

Bass is represented by two CDs in Mega Man & Bass. The first is located in Astro Man's stage and can fittingly be acquired only by Bass himself, who must use Treble Boost to fly up a vertical section above the appearing blocks.

The second, which features both Mega Man and Bass, is hidden in a corridor of the Robot Museum. Oddly, only Mega Man can obtain it, as it requires Rush Search to dig up.