This article is about the original 1987 game for the NES. For other uses, see Mega Man.

Mega Man, known in Japan as Rockman (ロックマン, Rokkuman) and sometimes disambiguated as Mega Man 1, is the first Main series game in the Classic era and the first of the Mega Man series as a whole, developed and published by Capcom and released for the Nintendo Entertainment System in 1987-89.

Though more basic in its execution than later games, it established the core gameplay elements and characters used throughout most of the Classic era and eventually spawned the Mega Man franchise of games and other media. It has been re-released in collections like the Mega Man Legacy Collection, and also received an enhanced remake for the PlayStation Portable as Mega Man Powered Up in 2006.

Mega Man marks the beginning of the Classic era storyline, starting after the creation of a batch of humanoid robots - including household robots Rock and Roll - by Dr. Light in the year 20XX (or 200X). When Dr. Wily steals and reprograms six of the robots, Rock is converted into Mega Man and sent to stop the evil doctor.

Unlike most later games, the game's story is not shown in-game and has been described differently depending on the source. Although the core is typically the same and the above story events can be inferred from later games and reference materials, the North American manual outlines the plot as follows:

But, with the exception of MEGA MAN, all of Dr. Wright's near-human robot experimentation went awry. Assistant Dr. Wily turned disloyal, re-programming Dr. Wright's Humanoids, now bent on destroying opposition so Dr. Wily could control the world and its resources.

Resisting re-programming, MEGA MAN is chosen the defender of the universe and its inhabitants. MEGA MAN dares to single-handedly penetrate seven separate empires of Monsteropolis, eliminating the leaders and followers of these sovereignties."[1] 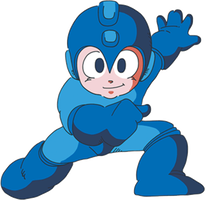 The protagonist and player character. Formerly a human-like household robot designed by Dr. Light, Rock was reconfigured into the fighting robot Mega Man to stop Dr. Wily's plans. He has the ability to take and use his enemies' weapons as he defeats them, allowing him to exploit their weaknesses.

The brilliant scientist who created Mega Man, his sister Roll, and the advanced robots stolen and reprogrammed by Dr. Wily. He has converted Rock into Mega Man and sent him on a mission to preserve world peace. He appears only in the game's ending.

His name is given as "Dr. Wright" in the game's North American manual.[1]

Dr. Light's rival and possible former assistant, depending on the version of the story. He has stolen and reprogrammed six of Dr. Light's robots, and is waiting for Mega Man in his fortress.

Rock/Mega Man's sister, who stays at the lab with Dr. Light. She appears only in the game's ending.

Each Robot Master boss yields a weapon the first time he is defeated, and has a particular weakness to at least one other weapon. Unlike later games, the Robot Masters will still be there when revisiting a stage.

These bosses are fought in Dr. Wily's fortress. They yield no weapons, but may have weaknesses.

Mega Man has a selection of weapons available that grows as he defeats Robot Masters. These weapons can be select from the pause menu, and only one can be active at a time; switching to a different weapon causes existing projectiles from the previous one to disappear.

Apart from the standard Mega Buster, all weapons cost weapon energy to use, which can be refilled by finding pick-ups in stages or automatically after defeating a Robot Master.

Six Robot Master stages are available from the start, which can be selected and played in any order. Beating the boss of each stage awards Mega Man with his weapon, and his life and weapon energy are fully restored. Uniquely to this game, the boss remains in the stage even when replaying it later, and must be fought again at the end.

After clearing all the Robot Master stages, Dr. Wily appears in the middle of the stage select screen; selecting him sends Mega Man to Dr. Wily's fortress, which consists of four stages that can only be played in a set order. No weapons are awarded for beating these stages, weapon energy is not recovered, and the player cannot return to the stage select in between them.

These items may drop from defeated enemies or be found inside the stages:

These items can be obtained in other ways:

Relation to other Games

A version of this game's backstory is adapted in the episode The Beginning of the 1994 Mega Man animated series. All Robot Masters from the game appear on the show, with Cut Man and Guts Man as part of the main cast.