Gravity Man (or Gravityman) is a Robot Master appearing in Mega Man 5. He is one of the Robot Masters ostensibly working for Proto Man in a bid for world domination, though like the others, he is later revealed to have been created by Dr. Wily.

Gravity Man appears as a large, red robot with a wide, vaguely V-shaped torso and a belt with a letter "G" on it. His weapon, the Gravity Hold, allows him to control gravity in a limited range, which he uses to invert its effects for both himself and Mega Man.

In Mega Man 5, Gravity Man is one of the main eight Robot Master bosses and appears as the second choice on the stage select screen. His stage contains unique elements that reverse Mega Man's (and some enemies') gravity when he walks past them, allowing him to walk on the ceiling.

In battle, Gravity Man starts out on the floor while Mega Man is on the ceiling, making them unable to touch. Throughout the fight, he repeatedly reverses his and Mega Man's gravity at random times, causing the two of them to fly across to the respective opposite side. If he collides with Mega Man during this, he deals 5 points of damage, and he is also able to shoot fast projectiles directly at Mega Man from anywhere in the room, which deal 4 damage on hit, but can be blocked with the Star Crash shield in a pinch.

To harm Gravity Man, Mega Man must shoot him while the two are flying past each other - ideally exploiting his weakness, the Star Crash, by hitting him with the spinning star shield for 4 points of damage. Defeating Gravity Man grants Mega Man the Gravity Hold, though it functions as a simple full-screen damaging weapon for him that only reverses gravity for enemies it defeats.

Gravity Man has a Net Navi equivalent in GravityMan.EXE, who appears in Mega Man Network Transmission as a boss. He has no operator.

In Mega Man & Bass, Gravity Man's CD is hidden in Dynamo Man's stage, which is thematically closest to his own. It is found in a short and narrow corridor at the top of a ladder and intended to be reached by Mega Man using his slide ability, without sliding into the spikes directly behind it.

Gravity Man appears under "Mega Man 5" in the Database in Mega Man Legacy Collection and is the first Robot Master listed for the game. Like other Robot Masters, he can be fought by pressing a designated button while viewing his data. 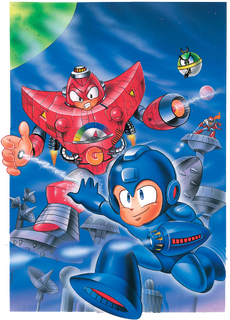