Guts Man, also spelt Gutsman, is one of the Robot Masters built by Dr. Light and stolen by Dr. Wily in Mega Man. He was originally designed for land development, but reprogrammed by Wily. His weapon is the Super Arm, designed for lifting and throwing large stone blocks.

Guts Man has made several appearances throughout the Classic era, especially in other media and games outside of the main series. His status as one of Light's original robots causes him to be featured both as a villain and as a friend to Mega Man.

Guts Man is one of the six Robot Masters that can be selected from the stage selection screen in the original Mega Man. He waits at the end of a mountain-based stage filled with chasms, Metalls and Pickmen.

As the largest and heaviest Robot Master in this game, Guts Man can make the ground shake by jumping up and down, which stuns Mega Man and makes him bounce backwards if he is on the ground. He is also able to throw large boulders at Mega Man, which break into four pieces upon touching the stone blocks in his boss room, similarly to said blocks if they are thrown by Mega Man using the Super Arm.

Although Guts Man himself doesn't appear in Mega Man 2, the fortress boss knowns as Guts Tank or Guts-Dozer incorporates his design in a gigantic robot on tank tracks. It is fought at the end of Wily Fortress 3 and is weak to Quick Boomerang.

Like other bosses from his game, Guts Man appears in the Mega Man 1 remake of Mega Man: The Wily Wars, with no major changes apart from updated graphics and receiving his own stage portrait. 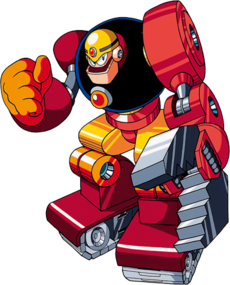 By the time of Mega Man 7, Guts Man has apparently been placed in a Robot Museum, which Dr. Wily attacks in order to steal him. When Mega Man arrives at the museum, he finds that he is too late, as Guts Man's display case has been shattered and Wily is in the process of lifting him from the building using the Wily Capsule.

Guts Man is later fought as the boss of Wily Fortress 2, now upgraded with new mechanical parts and known by the moniker Guts Man G.[2] Guts Man G is able to lower the ceiling and make stone blocks drop down, which he then breaks against the wall using a large claw arm. He will also use his new tank track feet to race forward and attempt to grab Mega Man, slamming him into the ceiling if he is successful. Repeat shots from Mega Man's weapon can be used to force him back.

His weakness is the Slash Claw, which deals the most damage if used to push his own stone blocks into him, effectively avoiding most of his attacks in the process. Apart from this move, all other attacks must go to his head or they will deal no damage.

Guts Man can be seen alongside Cut Man on the Capcom Times newspaper shown in the Mega Man 7 intro, appearing in a comic strip called "CUTMAN 2".

Guts Man's Net Navi equivalent, GutsMan.EXE, appears as a main character through the Battle Network era, debuting in the first Mega Man Battle Network. He is the Net Navi of Lan's rival and later friend, Dex, and by extension a friend/rival to MegaMan.EXE.

In the 1994 Animated Series

Guts Man is one of the main characters in the Mega Man cartoon, showing up in most episodes as one of Dr. Wily's goons. He is usually paired with Cut Man and at least one additional Robot Master specific to the episode. His design is strikingly similar to his artwork from the games, the most notable difference being his jaw, which is now bluish to give it a more metallic appearance. His ears have also been changed to grey rather than the skin colour more commonly seen in game-related artwork of the time, although this matches his colouration in Mega Man Powered Up.

As in the games, Guts Man possesses great strength, enabling him to pick up large objects, break through walls and battle enemies with his bare fists. He has an equally bold attitude, causing him to take an aggressive, brute force approach to completing his tasks and dealing with Mega Man. This behaviour is often his downfall when he is provoked into doing something without thinking, and he is frequently overpowered or even seriously damaged by Mega Man or Roll.

In Mega Man 3. all humanoid robots known to have been created by Dr. Light at the time are shown on info cards in the game's ending, including the Robot Masters from the first game. They are listed with their original tasks despite Mega Man's card acknowledging that he is no longer an assistant robot, suggesting that they may have been restored to their intended function after Dr. Wily's initial defeat.

Guts Man's CD in Mega Man & Bass is located in Burner Man's stage. It is placed in a location that requires tricky mid-fall navigation to reach and is intended to be obtained with Bass, though Mega Man can reach it by abusing the Lightning Bolt's function to briefly make him stop in midair.

Guts Man appears under "Mega Man" in the Database in Mega Man Legacy Collection and is the third Robot Master listed for the game. Like other Robot Masters, he can be fought by pressing a designated button while viewing his data.