Rush is a main character of the Classic era, debuting in Mega Man 3. He is a robotic dog in red armour, developed by Dr. Light to assist Mega Man.

Since his debut, Rush has featured in almost all Classic era platformers, usually being summoned by Mega Man for his ability to transform into various tools and vehicles, perform support functions like searching for items, or even merge with Mega Man to grant him powerful new armours.

He is the first of Mega Man's animal companions, a role he would later be joined in by Beat and more rarely Tango. 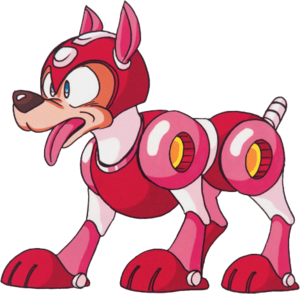 Rush makes his first appearance in Mega Man 3, where he is given no further introduction in the game or English-language supplementary materials. Already, he comes with three forms that he can transform into: The Rush Coil, a springboard coming from Rush's back fulfilling the role of Item-1 or Item-3 from Mega Man 2; the Rush Jet, replacing Item-2 as a flying platform, though it can be controlled freely in every direction and stop in midair in this game; and Rush Marine, a submarine that only functions in water and allows Mega Man to swim in all directions while firing shots from Rush's mouth. While the Rush Coil is available from the start, the other two must be unlocked by beating Needle Man (Jet) and Shadow Man (Marine), respectively.

To use any of Rush's forms, they must be selected from the weapons menu, in the same manner as the boss weapons. Mega Man will take on a red and white colouration and gain the ability to summon Rush on button press, who then changes into the desired form. The forms consume energy only when they are being used, with a one-time cost for bouncing on Rush Coil (after which Rush will teleport out) and the Jet and Marine draining energy over time as long as Mega Man is riding on/inside them. 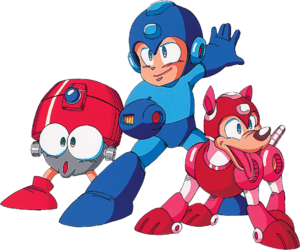 Rush reappears in Mega Man 4, largely unchanged apart from being a slightly different hue of red in his in-game sprite. His forms from the previous game return, with the Jet now being unlocked by defeating Drill Man and the Marine from Toad Man. The Rush Jet form has been changed, however, and will automatically fly forward until it touches a wall, unable to be steered in any other direction than up and down. This weaker transformation would become the standard for later appearances of his Jet form. 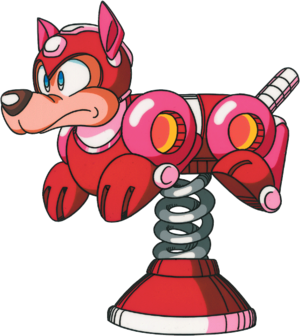 In Mega Man 5, Rush Jet returns from the previous game and is now acquired from Gyro Man. The Coil has been replaced by the New Rush Coil, however, which flips the springboard from Rush's back to his belly and allows him to jump into the air while Mega Man stands on him, giving the Blue Bomber a higher boost than before. Rush Marine has been removed, likely due to the lack of opportunities to use it, and replaced with the non-Rush Super Arrow as the third utility weapon. 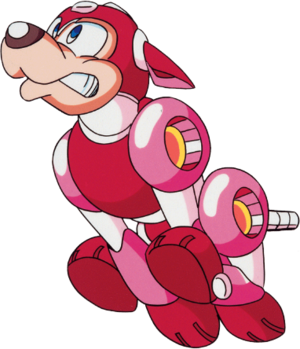 Mega Man 6 takes a wildly different approach to Rush, allowing him to fuse with Mega Man for the first time, rather than simply changing his own form. The new Rush Jet Adaptor (acquired from Plant Man) allows the two to combine into Jet Mega Man, who can fly for a limited time, while the Rush Power Adaptor results in Power Mega Man (from Flame Man), who can charge up his attacks for a powerful low-range "punch" that destroys certain blocks and otherwise invincible enemies.

Both forms grant Mega Man an elaborate new armour that shares Rush's red and white colouration and some aspects of his own design. As a separate entity, Rush only appears in a brief cutscene that plays when selecting either of the armours, and can no longer be summoned in any other capacity. 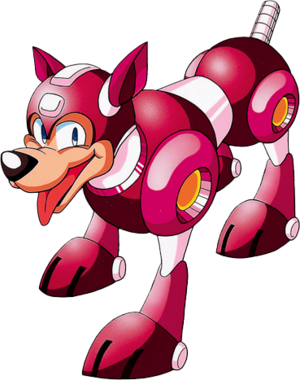 In Mega Man 7, the Classic era's debut on the SNES, Rush can once again be summoned as a separate characer (minus the special colour scheme for Mega Man), with his Rush Coil restored to its original form. His independent Rush Jet form also returns, now acquired from an optional item located in Junk Man's stage, though it has been downgraded further since its last appearance in a main numbered installment, now disappearing and sending Mega Man plummeting if he touches anything harmful while in the air.

New to his arsenal is the Rush Search, found in Freeze Man's stage, which summons Rush in his basic dog form and allows him to sniff around and dig for items. Depending on where the form is used, he may dig up useless objects, pick-up items, or even major upgrades, and he will also bark to alert Mega Man of nearby secrets, like hidden objects or passages.

Also new are four hidden R-U-S-H letters, which can be found in the first four Robot Master stages and unlock the Super Adaptor, once again allowing Rush and Mega Man to fuse into the new Super Mega Man form with a Rush-based armour. This form combines traits of the Jet and Power forms from Mega Man 6, allowing Mega Man to fly in short boosts and also charge up a powerful fist attack, which can be further upgraded with the Hyper Rocket Buster.

In Mega Man 8, Rush returns as a support character, though his previous transformations are mostly absent. His new Rush Question and Rush Charger functions allow him to give items to Mega Man, Rush Bike becomes a motorcycle for Mega Man to ride, and Rush Bomber drops bombs on enemies. Unlike previous Rush abilities, all of these forms can only be called upon once per stage.

Apart from being called by Mega Man, Rush also appears by himself in some sequences, using the Special Rush ability to allow Dr. Light to communicate with Mega Man via holographic projection, or turning into a version of his old Rush Jet form that Mega Man must ride through a long section of Tengu Man's stage while shooting down enemies.

Rush is mostly absent from Mega Man & Bass, but his Rush Search function from Mega Man 7 can be purchased in the Shop as an item exclusive to Mega Man. It works largely the same as it did before and is optional to reaching the end of the game, though essential for completing the optional task of collecting all the data CDs, many of which are buried. The CD Finder upgrade can allow Mega Man to see sparkles that tell him where Rush Search should be used.

Curiously, copies of Rush can be seen in this game's version of the Robot Museum, being found in several glass cases in the background of the large room in which King is first encountered and the Green Devil is fought.

Rush appears as a main character in every episode of the 1994 animated series, frequently using his Jet or Marine forms to give Mega Man a ride or providing comic relief. When not transforming, Rush acts similar to a real dog and can be considered the house pet of Mega Man and Dr. Light, though he is capable of limited speech, communicating in a mix of simple words and dog sounds.

Rush's CD in Mega Man & Bass is found in Dynamo Man's stage. Fittingly, it is buried and can only be dug up by Rush himself, using Rush Search.