Metalls, also rendered as Metools, Mettools or Mettaurs (all from the Japanese メットールmettooru) or shortened to Mets, are small hard hat robots appearing throughout the Mega Man franchise. They debuted in the original Mega Man and have since appeared in every era except Legends, usually as enemies.

Due to their frequent appearances and cameos, Metalls can be considered mascots for the franchise.

Metalls (called Mets in the English manual) first appear in the original Mega Man on the NES, although they do not yet possess the look that is more commonly associated with them. In this game, Metalls are found only in Guts Man's stage and are nothing but black blobs with sleepy eyes hidden underneath a hard hat, lacking the mouth, ears and feet of most later appearances.

Mets hide under their helmets and are completely invincible until Mega Man comes near. When he does, the Met peeks out from under its helmet and fires three slow-moving projectiles - one straight forward, one diagonally upward, and one diagonally downward. Mega Man must time his shot and hit it before it takes cover again, which destroys it instantly and awards the player 500 points. 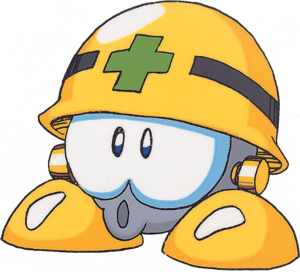 Metalls reappear in Mega Man 2 under the name Neo Metall, now sporting their better known look including a pair of yellow feet, yellow ears and a mouth, although the latter is only visible in artwork. They appear in Crash Man's stage and behave similarly to their original model, but are now able to run a short distance after every shot before hiding under their helmet again. Curiously, the time they spend pausing and then running results in a larger window of vulnerability and a greater delay before another shot, making them easier to destroy than the more primitive version. 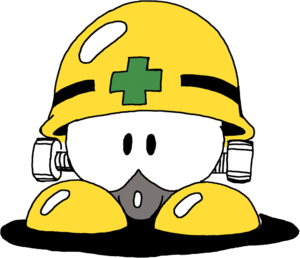 The standard Metalls in Mega Man 3 are known as Metall Deluxe or Metall DX, though they appear largely identical to the ones from the previous game apart from their sprites being more detailed. An unnamed variety with a propeller on its helmet also exists, which flies up and tries to move above Mega Man before firing three shots downwards. These flying Metalls can only be found in the Doc Robot version of Needle Man's stage.

The game introduces the first Metall-based miniboss in form of Giant Metalls, two of which are fought in the Needle Man Doc Robot stage. They spawn regular Metalls, though these do not shoot or hide under their helmets and will simply walk towards Mega Man until destroyed. 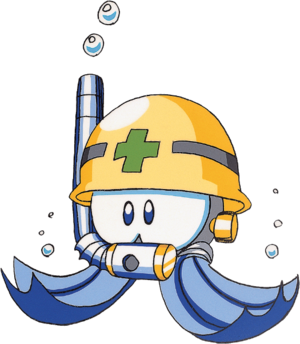 In Mega Man 4, a Metall vartiety known as Metall EX appears, again with the same design as before. While the traditional walking variety (which now walks more slowly but starts its walk sooner) still exists, some of these Metalls are able to hop between attacks, and others will spin in place while firing three individual shots straight forward. These spinning Mets require three hits with the Mega Buster rather than the usual one, making it harder to destroy them before they can shoot at Mega Man. The game also sees the addition of Metall Swim, an underwater variety that swims upwards while attacking and then drops down again.

This game's first Dr. Wily stage is themed around Metalls, featuring all of the game's varieties as the only enemies in the stage (apart from a single Garyoby). It ends on a large Metall boss, Metall Daddy, which causes walking Metalls similar to those created by Giant Metalls to drop from the sky. 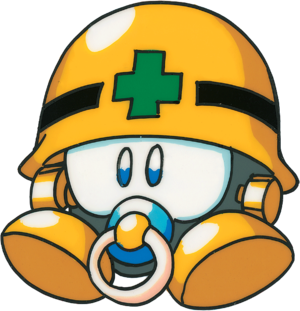 Regular Metalls do not feature in Mega Man 5, being replaced with Metall Mommies instead, which look identical but explode into small Baby Metalls when destroyed. Other varieties can also be found, including Space Metalls, Metall Cannons, and the train-riding Metall K-1000. 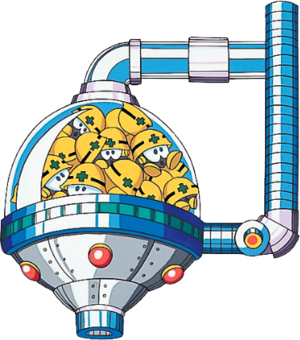 In Mega Man 6, Metalls of an unnamed variety appear as somewhat rare enemies. These resemble the Metall Mommies from the previous game in behaviour and appearance, but they do not explode into Baby Metalls.

Special moving versions of these Metalls are created by the Metall Potton mini-boss primarily found in the Restricted Area, a giant, stationary dispenser that has many Metalls inside a glass container; these models will either relentlessly jump towards Mega Man while repeatedly firing off spreading shots, or run towards him and only jump when they get to an obstacle. Later, a boss known as Metonger Z in Mr. X's fortress sees a regular Metall piloting a giant mecha, which chases Mega Man while shooting round projectiles in a variety of patterns.

Metalls make their first 16-bit Classic era appearance in Mega Man 7, with the main variety bearing the name Metall FX. These Metalls first appear in the intro stage and resemble their Neo Metall look, but have yellow mouths instead of black ones, much like their Mega Man X variety.

A Metall appears as one of the possible images used for a password. They are also referenced in a gag in the intro stage, where Auto erroneously hands Mega Man a Metall helmet instead of his own, blue one.

In Mega Man 11, Metalls appear similar to their Neo Metall look, but with grey ears instead of the more common yellow and with segmented feet. They are known simply as Metalls, with no further specifications given.

Metalls, known as Metall C-15, appear as enemies in the first Mega Man X. They strongly resemble their common Classic era design, but are drawn in artwork to appear slightly more detailed and robotic. They also possess yellow-coloured mouths, as they would in Mega Man 7 (which was released later). Instead of the more common three bullets, they only fire one in this game, and may also chase after X when he turns around and try to bump into him.

On the password screen, several Metalls are seen in every numbered panel, randomly peeking out from under their helmets. They are irrelevant to the level password, however.

While Metalls don't appear as independent enemies in Mega Man X2, the enemy Garakuta Robot found in the Robot Junkyard Stage uses two Metall C-15s as shoulder pads. They don't appear to be functional, and while the Garakuta Robot's pieces fall off as it is damaged, this does not turn the Metalls into separate enemies.

The standard Metall returns in Mega Man X8, now simply known as Metall and using another design variation on its original design. It can be found in the Noah's Park and Metal Valley stages.

Several other enemies based on the Metall appear throughout the X games, with varying degrees of similarity in behaviour and design. These include the Planty, Mettaur D2, Metall T, Metall S, Cone Metall and Scrap Metall.

In most games of the Zero era, Metalls are not normally found in the levels. However, some Cyber-elves (identified by names starting with "M-" or "Met") possess the ability to turn enemies into Metall varieties known as Metall RW, Heli Metall RW and Swim Metall RW, resembling the Metall FX models found in Mega Man 7.

Metalls, here rendered as Mettaurs, appear as common viruses and associated chips in the Battle Network era, debuting in the first Mega Man Battle Network. Unlike the heavy redesigns seen in the Battle Network incarnations of other characters and enemies, They resemble their common look from the Classic era very closely, but have no mouth and are seen wielding and using pickaxes.

This article is a stub. You can help Mega Man Wiki by expanding it.