Cannon Driver is an enemy first appearing in Mega Man X2. It is a tall, stationary robot with small turrets in place of arms and two large cannons mounted to the front, the latter of which provide its main method of attack.

In Mega Man X2, Cannon Drivers appear as rare enemies, with a single one each guarding the boss doors in the Robot Junkyard Stage, Dinosaur Tank Stage, and X-Hunter Stage 2. While X is near, they will fire cannonballs forward in a straight line at regular intervals, alternating between the top and bottom cannon. These cannonballs explode when they hit a wall, but deflect all shots and deal 4 points of damage if they manage to hit X, or 2 points if he touches the explosion just as it appears. As the Cannon Driver can withstand many hits at 14 HP, X may have to time his movements around the shooting pattern when fighting it, though the Magnet Mine, Spin Wheel or Silk Shot can usually take it out in a single, well-aimed shot. Cannon Drivers always face to the left, even if X manages to get behind one.

One particular Cannon Driver can be found just outside the entrance of the Abandoned Reploid Factory, and is in fact the first enemy that players encounter in the game, though this individual is badly damaged due to X crashing a Ride Chaser into it in the stage intro. The resulting enemy is missing its lower half, making it easier to jump over, and also leaving it with only one cannon to shoot from. Its HP are also reduced to 4 instead of the usual 14, though its damage stats for cannonballs and collision are the same.

In Mega Man Xtreme, Cannon Drivers appear in the game's second set of stages, accessible only in Hard or Extreme mode. As the game's stages are largely derived from the earlier games, there is once again one Cannon Driver each to be found in the Robot Junkyard Stage and Dinosaur Tank Stage, guarding their respective boss doors.

They act largely the same as they did in the SNES game, though their health has been increased to 20 HP. The one in the Junkyard stage also has been placed so that X's buster shots can hit it without ever being in its line of fire, making it trivial to defeat. 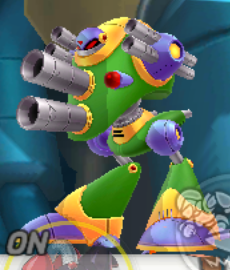 In Rockman X DiVE, Cannon Drivers can be found in the Story mode starting from Oil Field, as well as appearing in some Event, Co-op and Jakob Orbital Elevator stages. They strongly resemble their artwork from X2 and are also similar in function to their original appearance, but fire yellow projectiles instead of cannonballs, which no longer block shots. They also have gained an additional attack, shooting a pair of homing missiles at the player character. Unlike the enemy in X2, they can attack in either direction and will try to face the player, though they flip around instantly rather than turning.