Dr. Wily's fortress is Dr. Wily's base of operations in the Classic era. Wily has used multiple fortresses throughout the franchise, most of which share common themes, such as incorporating a giant skull and/or a "W" insignia into their architecture. Although most fortresses are unnamed in the games, different terms have been used to describe them in other sources, such as Wily Castle and Wily Fortress. The stages therein are also conjecturally referred to as "Wily stages" or "Dr. Wily stages".

In the games, the fortress is almost always the final location visited by Mega Man, unlocked after defeating all the Robot Masters and sometimes preceded by a different fortress or other set of stages. It is usually divided into four stages, each with a boss at the end, though one or two additional stages are sometimes added. These stages are displayed on a map in most games and always have to be played in a set order, in contrast with the Robot Master stages, which allow the player to choose the order freely.

Although each game's Dr. Wily stages are different, common elements include obstacles that encourage Mega Man to use the weapons and items he acquired throughout the game, a teleporter room forcing him to refight all of the game's Robot Masters, and a final boss stage that is very short apart from its boss battle. Beating Dr. Wily's fortress customarily triggers the game's ending, which often shows the fortress exploding.

In the original Mega Man, Dr. Wily's base is indicated to be a robot factory rather than a traditional fortress in supplementary sources, though its outward appearance is never shown in the game and it is only referred to as "the final stage" in the game's English manual. It can be accessed by selecting Dr. Wily on the stage select screen after defeating all six of the game's Robot Masters, leading to a short cutscene of Wily boarding the Wily Capsule before the game teleports Mega Man to the fortress. Like most later fortresses, it is already divided into four individual stages, though it lacks a map. It also notable requires the Magnet Beam from Elec Man's stage to conquer, which can be missed, making the stages impossible to complete.

The score bounty for completing the fortress is always set at 200000, unlike the randomised scores for beating the Robot Master stages. Its ultimate fate is unknown, as it is not shown to be destroyed following Wily's defeat in this game.

Wily's fortress in Mega Man 2 is the first to display a map before each stage, with stages indicated by dots and the apparent final boss marked by a skull. After beating it, a previously hidden second skull-marked stage appears on the map for the true final boss fight, a tradition kept by later fortresses.

In Mega Man 3, Wily's fortress is unlocked after beating all of the Doc Robot stages and Break Man. After a cutscene at Dr. Light's lab that reveals Wily stole the peace-keeping robot Gamma, Mega Man heads straight to the fortress to defeat him. 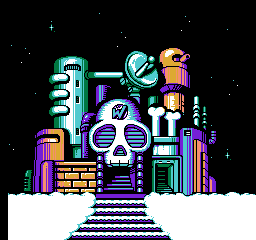 Image from the map screen in Mega Man 4.

In Mega Man 4, Mega Man proceeds to Dr. Wily's fortress after beating the Cossack Catcher in Dr. Cossack's citadel and watching the cutscene revealing Wily as the villain. The environment around the fortress resembles that of the earlier citadel, suggesting that it may be located in Siberia just like it, but this is never made clear. It is also located near train tracks, which Mega Man uses to return home after the fortress explodes, a callback to the train ride seen in the intro of the game.

Dr. Wily's fortress is known as Gear Fortress in Mega Man 11, a rare instance of the fortress being named in the game. As the name indicates, a number of large clockwork gears are used in its design and are visible both on the map and throughout the fortress stages.

Mega Man II on the Game Boy again split up the Wily stages between a fortress and a space station, with the former mostly serving as a means to access the remaining four Robot Master stages rather than being a full stage itself.

Although the Mega Man Battle Network games are set in a different timeline, the bases used by Lord Wily's criminal organisation, the WWW, pay homage to the original Wily fortresses, being split into multiple network areas and incorporating skull designs in their real world architecture.

In the 1994 animated series, Dr. Wily's fortress is known as the Skull Fortress, owing to the large, golden skull that makes up its entrance. Like the various machines used by Wily throughout the show, it is shown to contain a monitor system that allows him to watch proceedings and communicate with his Robot Masters.

Template:Battle Network era This article is a stub. You can help Mega Man Wiki by expanding it.