Mr. X's fortress[conj.] is a base used by Mr. X, appearing as the first of two fortresses in Mega Man 6. 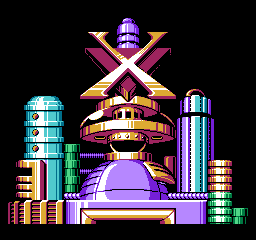 Image from the map screen in Mega Man 6.

In Mega Man 6, Mega Man enters the fortress by selecting the "Mr. X" icon on the stage select screen, which appears in the centre after defeating the eight Robot Masters.

Unlike Dr. Wily's fortress, which often uses a skull theme and resembles a sort of castle, Mr. X's domain is depicted on the map as a futuristic complex with tall skyscrapers/towers and a giant "X" logo attached to the top part of its central building. Emphasising the more modern look, its high-rise buildings have glass window walls, which Mega Man can break through as Power Mega Man to infiltrate it more quickly.

Like most fortresses, Mr. X's fortress is divided into four unnamed stages, each with a boss at the end. These stages must be played in order, have no individual passwords, and weapon energy carries over between them.